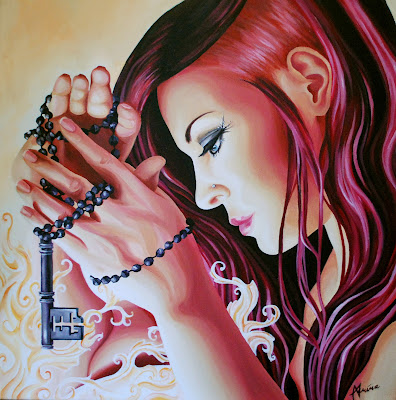 Ardent Shadows is the artwork of Jemima Mantle. Concerned with creating work which reflects the artists own alternative lifestle, Ardent Shadows is aimed at those who thing art should be accessible without explanation. It's hoped that each piece sparks and emotive response and wherever possible incite some intrigue and imagination in the audience themselves.

Currently Producing original paintings of fantasy, fetish and alternative culture, Jemima's work can often be found at tattoo conventions and events. Jemima studied fine art at A-level and foundation level. Becoming disillusioned with the sensationalist art movements, the artists studied BA illustration for a practical use for her skills. Shortly after graduating Jemima returned to painting and began Ardent Shadows.
Ardent Shadow's Website

Against the grain: Information